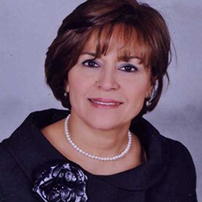 Ms. Imen Zahouani holds a Master’s degree in Labor Administration. / National Institute of Labour and Social Sciences (INTES), she is graduated from the Institute of Administrative Leadership – (2013- 2014) ; she is also graduated from the National Defense Institute – Tunis (2010-2011). She has held several positions between 1990 and september 2018, respectively in the Ministry of Social Affairs and the Ministry of Women, Family , Childhood and Seniors ; as a General Director of Woman and Family affairs and General Director of International Cooperation on migration . Currently, member of the Bureau Director of the Association of graduates from the Institute of National Defense.