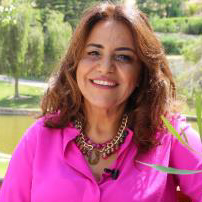 In 2009, she founded EDGE Consultants with its unique model stemming from her unconditional belief in humans. She designed it to be an invention hub oﬀering enlightenment, invigoration and freedom through its depth of belief and aﬄuence of tools. EDGE Consultants isa movement that redefines the humanexperience Iman’s burning passion and commitment to work is driven by a strong belief that every human is a masterpiece owning a treasure not yet discovered. In her encounters with people, she navigates through the mindset and heartset of the people she coaches opening new paths towards happiness, growth and enlightenment.
Along with her studies in psychology from the American University in Cairo, Iman has various international certifications in the field of corporate coaching, corporate culture tools, personality types and executive coaching. With her innate dedication to learning and growth, Iman earned a variety of certificates from the most renowned international institutions and among which are Harvard Business School, the Swedish institute of Management foundation, Florida International University, Barrett Values Center and many others.
Through extensive practice in the field for over 27 years, Iman managed to build a unique depth in understanding the dynamics of the corporate life and achieved substantial results in transforming companies’ performance through her unique approach of coaching.
Iman was among the 365 authors worldwide who wrote “The World Book of Values”. She was also acknowledged by “the Association of Change Management Professionals” as a Distin- guished Speaker in their 2014 Conference in Dubai, UAE.
Iman is also known for her unique ability in addressing the public and delivering the most complex concepts in the simplest way possible. She was featured in several television and radio programs on channels like CBC and Abu Dhabi as well as Mega FM.