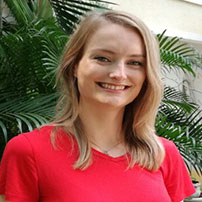 llona has been living in Chennai since April 2017. She joined her partner as he was asked for an expat assignment by his company. Back in the Netherlands, she had finished her Master’s degree in Communication. After moving to Chennai she joined the same company as a trainer. This being a Dutch company, the employees might face some cultural differences when communicating with colleagues in The Netherlands. Ilona has provided intercultural training in an interactive manner to understand both cultures. She believes this facilitates working together as a global team and furthermore, it contributes to a better understanding of our own perspectives. She herself is daily still learning new insights about the (South) Indian culture and also about her own culture. Later on, she became involved in a lot of other activities within the company too.
In her free time she likes to work out, practice yoga, travel, meet friends and discover new places here in Chennai.