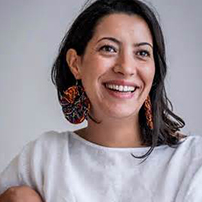 Ikram Ben Said is a feminist activist and Founder of “Aswat Nissa” (Voices of Women), a Tunisian nonprofit organization promoting women’s active participation in the political and policy-making spheres and advocating for gender sensitive public policies. Her initiative “Women Political Academy” won the Madeline Albright Award for Women Political Participation.
Ikram is also a member of the Advisory Group of Experts on Youth, Peace and Security. Appointed by Secretary-General Ban Ki-Moon to support the Progress Study related to the UNSCR 2250.
She studied public policies at the Humphrey School of Public Affairs at Minnesota University and has also a Bachelor’s degree in Marketing from the Higher School of Economic Science and Commerce in Tunis.
Ikram Ben Said is a passionate professional of the International Development sector who uses her expertise to advance her vision of the world where people are free and equal, where human rights for all are protected and respected and where social justice is guaranteed.

Ikram was featured as the Next Generation Leader, first edition in Time Magazine in 2014. She also, was featured as “Influential Voice and Stalwart Champion for the Rights and Opportunities of Women and Girls” at the Clinton Foundation.