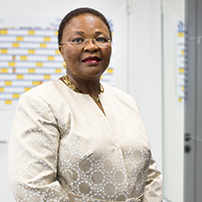 Previously Judge Monageng served as an expert High Court Judge in the Kingdom of Swaziland, under the auspices of the Commonwealth Secretariat. Prior to this, she served as a Judge of the High Court of the Republic of the Gambia in the same capacity. She started her legal career as a Magistrate in Botswana. Judge Monageng was also a member of the African Commission on Human and Peoples’ Rights appointed by the African Union, between 2003 and 2009, and was appointed as the Commission’s Chairperson in November 2007. She also served as Deputy Chief Litigation Officer in the United Nations Observer Mission to South Africa in 1994. Judge Monageng served as the founding Chief Executive Officer of the Law Society of Botswana for many years. She possesses expertise in women’s human rights issues, indigenous peoples and communities and children among others. She is a member of the International Association of Women Judges and the International Commission of Jurists, among others.