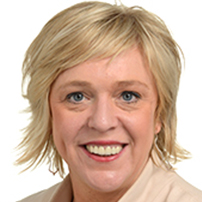 Hilde VAUTMANS is a Belgian Member of European Parliament (ALDE, Open Vld) since 12 January 2015. She is member of the Foreign Affairs Committee, the Security and Defence Committee and the delegation for the relations with the NATO Parliamentary Assembly. As a substitute she is a member of the Agriculture Committee and the delegation to the ACP-EU Joint Parliamentary Assembly.
Hilde is member of the ALDE group, the liberal group of the European Parliament, for which she is Vice-coordinator on Foreign Affairs, Security and Defence. She also acts as the delegation leader of Open Vld, the Flemish liberal political party, in the European Parliament.
Hilde started her political career at the office of, then Prime Minister, Guy VERHOFSTADT, advising him in the fields of foreign and military affairs, external aid and equal opportunities. She was during two legislatures Member of the Belgian House of Representatives, while being the group leader of Open Vld for a while. She switched to being the secretary general of Open Vld in the House of Representatives and from there on joined the EP.
She combines her office as MEP with being an alderwomen in the City of Sint-Truiden, responsible for education, agriculture, military affairs and environment. She is the mother of two children.
Hilde has spent much of the last year highlighting the plight of unaccompanied minor refugees. As a recognition for her work, she received the MEP Award on Foreign Affairs in 2017, an award that looks to recognise an MEP that has made a substantial contribution towards promoting the interests and values of the European Union through Foreign Policy.
Hilde is an advocate of women’s rights and considers herself a true feminist. In 2016, she received in Belgium the honorary title of “vredesvrouw” (peace women), a title you receive when you are considered to implement UN-Resolution 1325, a resolution which emphasizes the role that women play as defenders of peace and women’s rights. She received the title for her continued efforts to promoting the rights of women and gender equality. During her career, she devoted particular attention to violence against migrant women, to sexual rights of women, the fight against “Fistula Obstetric”, the right to abortion, female circumcision, sexual education for girls but also to gender inequality in the labour market such as the gender pay gap, the gender pension gap and the glass ceiling. In the European Parliament, she consistently monitors the situation of women in the DRC, particularly in Eastern Congo and advocated for a woman as Secretary-General of the UN.
Hilde has also been a member of the European Parliament Forum on Population and Development (EPF), a network of members of parliaments from across Europe who are committed to protecting the sexual and reproductive health of the world’s most vulnerable people. From 2011-2015, Hilde served as chairwoman of Open Vld Vrouwen (Open Vld Women), the liberal women’s movement of Open Vld.