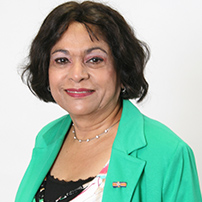 In 2008 Henna was awarded with the Knighthood of the Order of Orange- Nassau. She received this order for her extensive volunteer work. For 23 years she has been active in the after school support of Hindustani parents She is the president of the Sarita foundation for 23 years and organizes various activities. Her main goal is promote diversity in higher position and to create more opportunities of day care centers so that woman have a better chance to develop themselves. For the eldery people she has been active as the secretary of the Hindu Eldery Union. Now a days she learns the seniors to use a tablet, It combat loneliness.
• Henna was famous for presenting a billingual radio programma in wich she treated topics such as domestic violence and parasuicide with the objective to move these issues out of the taboo sphere.
• Currently Henna is active at the Melania foundation, an international project for and by woman in Developing countries in Asia, Africa and South America.
• Henna is employed for 43 years as a teacher at a secondary vocational education and study career counselor, coaching and development.
Other received several awards:
• Special The Hague Pin
• Hilda v. Suylenberg- award;
• Humanistic value for diversity policy
• Top 100 for the best colorful social drivers
• Foundation Sarita get a certificate for a mark
• The Kartini Award for invest woman emancipation.