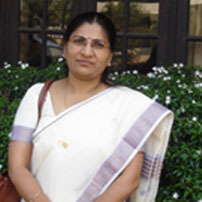 Hemalatha M holds a B.E degree in Electronics and post graduate degree in Digital Electronics from Mysore University, she joined ISAC-ISRO as Scientist Engineer ‘SC’ in the year 1999. She has been working in the Control and Digital Electronics group as design and development engineer and Section Head for on board testing. Her role includes design and development of On Board Attitude and control electronics(AOCE) On Board Computer(OBC) hardware systems for multi projects such Geo satellites, remote sensing and Interplanetary spacecraft’s. She was instrumental in the design of new Attitude and Control Electronics for Mars Orbiter Mission. She also designed and developed miniature On Board computer for Micro satellite series. She has been actively involved in the pre and post launch activities. Other than AOCE and OBC her interest includes design of drive systems for stepper motors. She was entrusted with the responsibility of Project Manager for AOCE subsystem for the prestigious Mars Orbiter Mission. Presently she is Deputy project director for Chandryan-2 orbiter, GSAT-30 and GSAT-31 satellites.
She has delivered technical talks in educational institutions. She is a recipient of team excellency awards of ISRO for” Mars Orbiter Mission” in the year 2016. Her favourite pass time includes listening to Music and travel.
Other satellites she worked so far as project manager are METSAT, HAMSAT, GSAT-2, INSAT-4B, GSAT-4, GSAT-14, GSAT-10 as project manager.