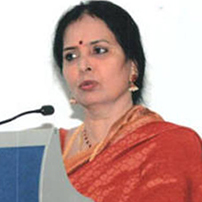 Ms. Hema Gopal, Vice President and Global Head IBM Centre of Excellence, Tata Consultancy Services has completed her MS in Computer Science from the Indian Institute of Technology, Madras. She holds a Bachelor’s degree in Electronics Engineering from the Anna University and a Bachelor’s degree in Mathematics from the Madras University.
Hema has over 30 years of experience in winning, executing and managing engagements for various areas of Software Engineering for customers across the world. She is currently the Global Head for TCS’ IBM Centre of Excellence. She has widely travelled to many countries, to meet the customers across various industry verticals.She has been a topper in her academics from the school days and she was a state rank holder in SSLC.She studied Pre University,B.S.C,B.Tech and M.S in Natioanl Merit Scholarship given by the Govt of India. She is well known Orator in Tamil throughout her life. Being one of the early Computer Science Specialists from IIT Madras, when the Indian IT Industry was at its nascent stage, Hema emerged as a Technology Specialist from her trainee days and was part of several challenging assignments for Indian customers. She has worked in multi-platforms ranging from ICL, Tandem, IBM Mainframes and Burroughs. She possesses thorough knowledge on IBM Mainframe, was trained by IBM in New Zealand in 1986 and has worked on a variety of Mainframe and its related products for over three decades. In early 90s, Hema has executed stateof-the-art, complex platform migration, application migration and application convergence projects for customers across the globe. After these successful turnkey engagements, many strategic customers, such as a large Manufacturing customer and a large Cards Issuer, became TCS customers for more than three decades due to the exceptional quality of deliverables. In late 90s, Hema and team delivered several millions of lines of code for Y2K (Year 2000) remediation for customers across the globe with 100% delivery certainty. In early 2000s, she pioneered IT outsourcing, offshoring and transition methodology for various global customers. During this period, TCS bagged large outsourcing deals from multiple customers, which helped the organisation to take a quantum leap.