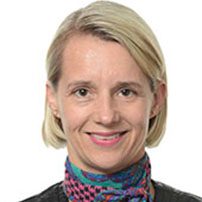 Helga Stevens was born deaf (on 9 August 1968) and grew up in a hearing family in the Dutch speaking part of Belgium. At first she attended a school for the Deaf in Hasselt. At the age of ten, Helga Stevens was mainstreamed into a regular school in her home town Sint-Truiden. After obtaining her high school degree in 1987, she spent one year in Saint Louis, Missouri, United States as Rotary Exchange Student. While she was visiting Gallaudet University, she met a deaf lawyer who convinced her to study law, as she was in doubt whether this was possible for a deaf person.

Upon return to Belgium, she enrolled at the Catholic University of Leuven. Helga Stevens was the first deaf person in Belgium to receive a law degree (Licentiate in Law) in 1993 from the Catholic University of Leuven and a Master of Laws degree (LL.M) in 1994 from the University of California in Berkeley, USA, where she had enrolled as Fulbright Student. During her law study in Leuven, she also spent 6 months as Erasmus Exchange Student at the University of Leeds, United Kingdom. In 1994 she started to work as attorney in training in a Brussels law office. Currently she is a honorary member of the Ghent Bar.

In 1996 she started to work for the European Union of the Deaf on the Sign Languages Project. Later she moved on to become General Secretary and then Director. As Helga Stevens entered into politics in 2004, she retired as EUD director. She was President of EUD from 2005 till 2007.

She has been a Member of the Flemish Parliament for 2 consecutive legislatures: from 2004 till 2014 (re-elected in 2009). From 2007 till 2014 she was also a ‘Community Senator’, meaning that she combined two mandates: sitting in both the Flemish Parliament and the Senate. During the July 2010 elections for the Senate Stevens (placed 2nd on the N-VA list for the Senate) scored as the 10th most popular politician in Flanders and 16th most popular politician in Belgium. Helga Stevens served as Vice President of the Belgian Senate from July 2010 till October 2011.

Helga Stevens has also held a local mandate: she got elected into the Ghent City Council in 2006 and was re-elected in 2012. But she left that position in August 2014 since it was difficult to combine this local mandate with her position as MEP.