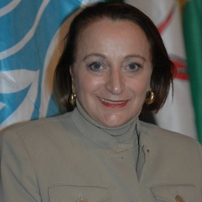 Hélène-Marie Gosselin’s unique career has led her to almost every country on earth, in management and leadership positions. Her networks span the globe and have facilitated remarkable achievements, which have been recognized by stakeholders and leaders in the public, private and non-profit sectors as well as the media. Her inspirational leadership and powers of persuasion have attracted tens of millions of dollars in funding and significant media profile to the projects she has led over the last three decades: thinking “outside the box”, mobilizing new partners, re-energizing existing ones and attracting new audiences.

Over the past decade, she has devoted herself mainly to the development of women’s empowerment & leadership. A member of the International Women’s Forum in Canada, she is the founder of the Austrian branch of the organization. In this capacity, she is mentoring several young professional women involved in public service, governance and the private sector. Likewise, she is supporting startups in female leadership.

In her former position as UNESCO’s Representative to the United Nations and Director of the Organization’s Office in New York (serving the United States and Canada), Ms Gosselin led a multi-disciplinary team of experts addressing global challenges in the areas of the organization’s unique mandate: education, the sciences, culture and communication. Over more than 30 years in international relations, she has developed advanced expertise in advocacy, networking, external relations and public information, as well as fostering major partnerships with stakeholders in the public and private sectors. Ms Gosselin was frequently asked to speak at the United Nations and at prestigious North American universities; she played a key role in rebranding UNESCO as a modern and effective global agency.

She has led a number of major advocacy initiatives to increase recognition of the need for universal education and literacy. She served as senior advisor to the United Nations Foundation on world heritage, and as a member of the Executive Board of the World Alliance for Sustainable Tourism, where has advanced the cause of partnerships for social responsibility by helping to bridge the gap between UNESCO programmes for world heritage preservation, the travel industry and national authorities responsible for tourism in Latin America and Mexico.

Ms Gosselin’s career in the United Nations System began in 1979. Early on, she held several positions at UNICEF. In this capacity, she spearheaded what are now recognized as the world’s first truly global public mobilization and fund-raising events in collaboration with Bob Geldof (Band-Aid) on Sport-Aid for famine relief in Africa. The events attracted hundreds of millions of television viewers in real time; Sport-Aid raised $40 million in one day. These were remarkable achievements in the pre-internet days of 1985/86.

From 1987 to 1991, she headed the Regional Communication, Information and External Relations programme at UNICEF’s Regional Office for West and Central Africa in Abidjan, Côte d’Ivoire. There, she persuaded governmental, private sector and non-profit stakeholders to work together to improve children’s lives through initiatives such as immunization, provision of safe water and other programmes and campaigns in child development and public education.

In 1991, Ms Gosselin returned to her native Canada for a two-year assignment as Director- General of the Communications Branch at the Canadian International Development Agency (CIDA) in Ottawa, a position at Assistant-Deputy Minister rank. There she led a team of one hundred staff and senior consultants in redefining the communications strategy of Canada’s foreign aid programme, including a $30-million public education programme. This ambitious strategy profoundly influenced Canadian public opinion and was later emulated in other countries including Japan.

In 1993, Ms Gosselin joined UNESCO as Director of the Office of Public Information at the Organization’s Headquarters in Paris. In 1997, the United Nations Secretary-General appointed her Commissioner-General for the United Nations System at the 1998 World Exposition in Lisbon, Portugal. Ms Gosselin raised substantial funds and organized a series of well-attended public events throughout 1998 – drawing wide attention to UN programmes on the theme of the oceans. The Secretary-General and opinion leaders in international development commended her leadership and on the quality of the UN presence at EXPO 98.

In 2001, Ms Gosselin was appointed Director of the UNESCO Caribbean Cluster Office in Kingston, Jamaica, where she was responsible for 20 countries of the CARICOM region. In this capacity, she oversaw the expansion of UNESCO’s programmes, with special emphasis on education, culture and access to information. She designed several major projects for co-funding by the World Bank, the Inter-American Development Bank, the British Overseas Development Office and the Japan International Development Agency (JICA). Ms Gosselin also spearheaded a co-publication with the University of the West Indies on strengthening HIV/AIDS education, and a regional health programme that has been cited by external evaluators as a UNESCO best practice in the field.

In 2002 Ms Gosselin was again appointed by UN Secretary-General Kofi Annan and by UNESCO Director-General Koichiro Matsuura, as Commissioner-General of the United Nations for Expo 2005 in Aichi, Japan. 2005 was the 60th Anniversary Year of the United Nations and the UN presence was extremely successful. While continuing to manage her Caribbean office, Ms Gosselin put together the popular UN Pavilion with 38 UN Programmes, Funds and Agencies, including the World Bank. The Pavilion attracted more than two million visitors. She also organized several major events on the theme of Nature’s Wisdom in Japan during this period.

After studies in history and political science at the Université de Montréal, Ms Gosselin began her career as Deputy Head of the Press and Information Service of the Delegation of the Commission of the European Community in Ottawa. She was also Editor-in-Chief of a Southam Publications monthly business magazine in Canada, and has won a number of prestigious journalism awards. Ms Gosselin is fluent in English and French and has a working knowledge of Spanish. She has also studied basic German, Portuguese, Italian and Arabic.