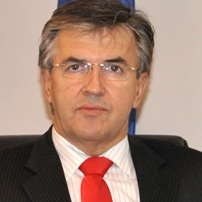 Ambassador of Bosnia & Herzegovina to India

Ambassador Sabit Subasic officially became the Bosnian Ambassador to India in 3rd March 2014. Before coming to India he was a diplomat in Turkey for several years, where he witnessed some of the crucial phases of unique democratic development of the nation. Earlier he was the Minister/Advisor of the Embassy of Bosnia and Herzegovina in Australia. Prior to this he has also held several other positions including Editor of the Municipality Paper of Ilidza, Advisor to the Ministry of Foreign Affairs of Bosnia and Herzegovina, Minister/Counselor/Head of Department of the Department for Planning and Analysis, Head of Department for human rights and acting Head of Department of Planning and Information among others.