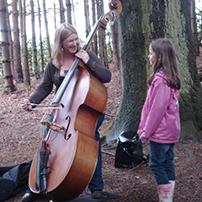 Heather was brought up in the Eden Valley in Cumbria where she was taught flute by a saxophonist, double bass by a cellist and received an eclectic musical education playing in youth orchestras, jazz bands and folk groups. After moving to Manchester she started ventured into acid jazz, and techno alongside orchestral playing.
While studying double bass at the Royal Northern College of Music she continued playing jazz and electronic music. She then lived in Angola, Mozambique and Spain playing more jazz, lots of tango and attempting flamenco before returning to the UK in 2010.
Heather founded Classical Evolution in 2011, which brings classical music to forests, beer tents and anywhere you’d least expect to find a chamber ensemble. It all began with a performance of the Dvorak quintet in Matt & Phred’s Jazz Club with violinist Ben Holland. Classical Evolution commissions new works, runs courses and puts on monthly gigs across the UK and New York City, including the only classical open mic night in the UK at Night & Day Café. Classical Evolution also runs education projects for adults and children including young people in the care system providing work experience within the organisation and the arts in general.
She plays regularly for many orchestras in the UK including Manchester Camerata and the Orchestra of the Age of Enlightenment as well as playing lots of chamber music often involving non-classical musicians and a diverse range of classical and non classical projects. She commissions new works for double bass, and chamber works, including works to include improvisation and collaboration with children and enjoys teaching them how to conduct. She is a guest lecturer at Manchester University and the Leeds College of Music, conducts the Cumbria Youth String Orchestra and is a member of the Royal Society of Musicians.
She now lives near Braga in Portugal where she is continuing Classical Evolution as Revolução Clássica, and is starting up a residential arts centre and retreat in the mountains.