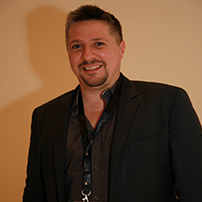 Head of Programmes, Financial Inclusion in the MENA Region (FIMENA), Deutsche Gesellschaft für Internationale Zusammenarbeit (GIZ) GmbH
Hayder Al-Bagdadi is the head of the two GIZ implemented programmes “Financial Inclusion in the MENA Region – FIMENA” and “Promotion of Access to Finance for SMEs in Egypt – PAFSME”. Prior to his current position, Hayder worked for the Alliance for Financial Inclusion (AFI) as a Policy Manager in the areas of digital financial services and SME finance. He also managed AFI’s policy grant portfolio for the Pacific, Asia, and Eastern Europe.
Before AFI, Hayder spent eight years at GIZ working on financial system and private sector development issues. At GIZ Headquarters’ in Germany, he was an Advisor in the Financial System Development (FSD) Unit of the Economic Development and Employment Department responsible for GIZ’s FSD programmes in Asia. Prior to this, Hayder served as a Project Manager in private sector development programmes in Indonesia, Bosnia and Herzegovina. His career began focusing on microfinance at GIZ Headquarters’ in Germany