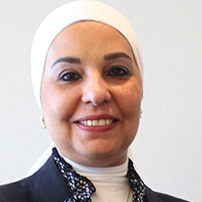 Currently retired and assists serval businesses on digital transformation and maintaining governance within their institutions. Hania led Technology, Operations and Services in HSBC Bank Egypt from January 2010 till 30 April 2019. She was also a Board member of HSBC Bank Egypt, the Chairperson of the Boards of both HSBC Egypt Electronic Data Services Company and HSBC Egypt Securities Company.
Her role with HSBC Bank Egypt entailed engaging with the various businesses and functions to manage the level of efficiency of Operations, Technology, and other Services to enable the growth and success of the Bank. She managed a team of circa 250 in country FTEs as well as oversight over 100s of outsourced FTEs. Her extended responsibilities included maintaining and strengthening the overall governance and risk management across the bank; leading the simplification agenda; identifying consistency opportunities, cost management initiatives for the bank as well as the execution of transformational changes.
By virtue of her tenure and seniority in the bank, she supported and deputized HSBC Bank Egypt CEO during his absence over 5 years and played a pivotal role in driving the relationship with the regulators and the various monitoring and supervisory authorities in Egypt.
Hania held a number of key roles in HSBC including setting up an Internal Audit function in Egypt, in line with the Global model, spending almost sixteen years in Information Technology introducing new systems, banking channels and products. Also, she held various roles in Branches and Trade Services as well as a Regional position as interim Regional Head of Operations.
Hania has been acknowledged by Forbes Middle East magazine for five consecutive years (2014-2018) among the most Influential Arab Women in the Middle East.
Hania holds a Master’s Degree in Economics from the American University in Cairo. She completed Harvard Business School Senior Executives of the Middle East Program. She speaks Arabic, English and moderate French.