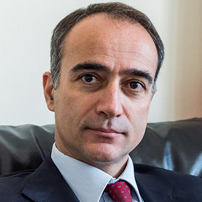 Ambassador of Italy to Bosnia & Herzegovina

Ambassador Corrias arrives in Sarajevo hailing from New York, where he served as Head of the Press Office of the Permanent Mission of Italy to the United Nations and managed intergovernmental negotiations on Security Council reform since 2009.
From 2006 to 2009, he assisted the Italian Prime Minister at Government headquarters, covering relations with the United States, Latin America, Russia and the diplomatic campaign for the 2015 Milan Expo. With the formation of a new government, he added the Balkans to his portfolio.

He served as Deputy Head of Mission at the Italian Embassy in Santiago (Chile) in the years in which the country had elected its first female President, Michelle Bachelet. Prior to this role (1999-2002), he was assigned to the Italian Embassy in Washington, where he directly experienced the dramatic events of September 11th, 2001.

At the start of his career, he served in the Diplomatic Protocol of the Republic of Italy responsible for arranging the foreign visits of the Head of the State. He was later appointed Deputy Chief of Staff to the Minister of State for Foreign Affairs where he covered Central and Eastern Europe and the Balkans.

He is passionate about his homeland, Sardinia, and has a keen interest in medical studies.