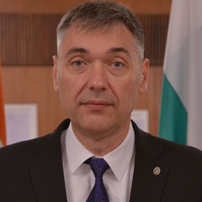 Ambassador of the Republic of Bulgaria to India

Prior to his current appointment Mr. Doykov served as Director General for Bilateral Relations (October 2013 – April 2014) and Security Policy Director (June 2012 – September 2013) at the Ministry of Foreign Affairs of the Republic of Bulgaria.

Earlier in his career Ambassador Doykov was assigned to the position of Director for Middle East and Africa at the Ministry of Foreign Affairs of the Republic of Bulgaria (2004 – 2008).

Prior to this he served as State Expert at the NATO Directorate of the Ministry of Foreign Affairs (2003 – 2004), Deputy Political Adviser at the Delegation of the Republic of Bulgaria to NATO, Brussels (1999 – 2003) and Expert at the Directorate for NATO, Western European Union and Security Issues of the Ministry of Foreign Affairs (1997 – 1999).

He started his diplomatic career as Third Secretary at the Embassy of the Republic of Bulgaria to the Arab Republic of Egypt (1993 – 1997) and Expert at the Arab Countries Directorate of the Ministry of Foreign Affairs (1992 – 1993).

In July 2012 he was promoted to the personal rank of Ambassador of the Bulgarian Diplomatic Service. In September 2012 he attended a Senior Executive Seminar “Beyond Al Qaeda: How to Understand and Counter Violent Extremism” at the George C. Marshall European Centre for Security Studies, Germany and in April 2014 he completed a Seminar in Effective International Negotiations, conducted by Ron Ton, Director of Clingendal Academy. Mr. Doykov has also attended courses in Public Presentation Skills (2006, British Council, Sofia) and in Multinational Negotiation Training (2000, Swiss Mission to NATO, Brussels). In 2015 and 2016 respectively he participated in the Programme on e-Learning and Digital Education in the Administrative Staff College of India in Hyderabad and the Winter School for Diplomats at the School of International Studies of the Jawaharlal Nehru University in New Delhi.

Mr. Doykov is a co-author of the book “The Benghazi Case: Bulgarian Diplomacy in Action” and author of the book “A New Beginning: Bulgarian – Arab Relations in the Period 2004 – 2008”. He has delivered lectures on theory and practice in conducting international negotiations at the European College of Economy and Management (ECEM), Plovdiv.

Since 28th June 2014 he is an honorary member of Rotary Club of Delhi Midtown.