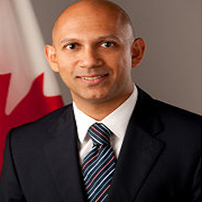 High Commissioner for Canada to India

From 1997 to 2003, he served as departmental assistant to the minister, director of ministerial services, agency adviser to the minister and secretary to the Board of Management.

In 2003, he transferred to the Privy Council Office, serving as chief of staff to the national security advisor to the prime minister, associate secretary to the Cabinet, and deputy minister to the deputy prime minister.

From 2005 to 2006, he served as senior policy adviser to the clerk of the Privy Council and secretary to the Cabinet. In 2006, he was appointed by the minister of international trade and the minister of transport as Canada’s chief air negotiator. Mr. Patel served as consul general in Shanghai from 2009 to 2011.