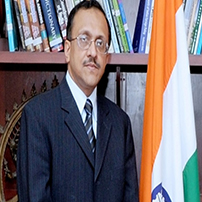 Ambassador of India to Neatherlands

H.E. J.S. Mukul, Ambassador of India to the Kingdom of the Netherlands, joined the Indian Foreign Service in 1981. Born on April 22, 1957, he is a post graduate in Political Science with specialization in International Relations and has held diplomatic positions in Embassy/High Commission/Permanent Mission/Consulate General of India in Damascus, Abu Dhabi, Kandy, Colombo, Geneva, Riyadh, Munich and Muscat, apart from postings at headquarters in the Ministry of External Affairs, New Delhi. His last assignment at headquarters was as Joint Secretary/Director-General (Technical Cooperation & Economic Relations) in MEA in charge of the Indian Technical and Economic Cooperation (ITEC), etc programmes. He was also the Ministry’s sous-sherpa for the G-20 process and was involved with six G-20 Summits. His last overseas assignment was as Ambassador of India to the Sultanate of Oman where he contributed to strengthening the India-Oman strategic partnership and welfare measures for the large Indian expatriate community. He has had varied assignments in his diplomatic career, involving both bilateral and multilateral diplomacy covering political/disarmament and economic-commercial work.

His special interest in the academic field is international relations which has been a useful input in his professional work as a diplomat. His functional area of specialization is economic-commercial work (including trade, investment and development cooperation), both at the bilateral and multilateral levels. Further, his geographical area of specialization has been the Arab world, especially the Gulf region as well as West Europe.

He is married to Mita and has two daughters – Aditi and Avanti. He is interested in reading, cricket and travel.