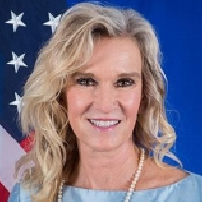 Lynda Gaye Cleveland “Lindy” Blanchard is a successful business executive and international humanitarian. Ms. Blanchard co-founded and was the former CEO of the 100X Development Foundation, created in 2004 in Montgomery, Alabama to foster creative solutions to eradicate poverty and its negative effects improving the lives of children around the world. Concurrently, she co-founded and was the Senior Advisor at B & M Management Company, a real estate investment management company valued at over $1 billion.
A skilled leader and strategic manager, Ms. Blanchard is a passionate advocate for children’s issues internationally and domestically. She has worked in Africa, Asia and South America engaging with local partners to further 100X’s mission resulting in innovative partnerships to establish orphanages, sustainable development programs, and food production companies that have improved the lives of thousands of families in 16 countries. As former CEO of 100X, Ms. Blanchard was actively involved in shaping and approving the goals and priorities of each of the Foundation’s programs.
An esteemed leader and advocate for people with special needs for more than 20 years, Ms. Blanchard has served on the advisory board for the Montgomery Area Nontraditional Equestrians, a non-profit organization that provides therapeutic horseback riding opportunities to people with emotional, physical, cognitive, and developmental disabilities. Ms. Blanchard has voluntarily served on the Boards and otherwise supported numerous other education programs in Alabama and has worked to help families who are interested in adoption.
Ms. Blanchard is mom to seven and an international adoptive parent. She earned a B.S. in Mathematics and a minor in Computer Science from Auburn University, learning five computer languages. She is the recipient of many international and domestic awards recognizing her humanitarian contributions. She speaks basic Spanish.