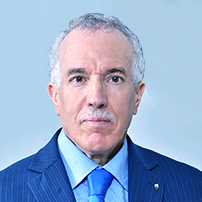 Ambassador of Algeria to India

On November 8, 2014, His Excellency Mr. Abdelaziz BOUTEFLIKA appointed Mr. Hamza YAHIA-CHERIF as Ambassador to the Republic of India and to Sri-Lanka, Maldives and Nepal with residence in New Delhi. The Ambassador presented his letters of credence to His Excellency Mr. Pranab Mukherjee, President of the Republic of India on March 18, 2015, and to His Excellency Mr. President Maithripala Sirisena, President of Sri-Lanka on September 18, 2015. His new posting in New Delhi comprises an important personal dimension for Ambassador YAHIA-CHERIF, as he served in India, from 1988 to 1990, as first Secretary and Deputy Head of Mission, before he has been sent again to New Delhi, in January 2001, to prepare the State visit of H.E. the President Abdelaziz Bouteflika, as Chief Guest to the Republic Day. Ambassador YAHIA-CHERIF’s 34-year diplomatic career includes an ambassadorship to Indonesia (and to Singapore and Brunei Dar Essalem with residence in Jakarta), from 2004 to 2009 and foreign postings in Tokyo (1984-1988) as First Secretary and in Stockholm (1996-2000) as First Counselor, Deputy Head of Mission. At the Ministry Foreign Affairs in Algiers, he has served as Ambassador, in charge of studies and synthesis at the Cabinet of H.E. the Minister of Foreign Affairs from 2009 to February 2015. He was also Deputy Director of South Asia prior to his appointment as Director at Asia and Oceania Division from 2001 till 2004. The Algerian Envoy has taken part in a variety of international gatherings such as G-77 (Buenos Aires-1983) the UNCTAD (Belgrade, June 1983), the Organization of the Islamic Conference (Kuala Lumpur-2002) and 5+5 Dialogue (Nouakchott-2013), as a member of his country’s delegation. Prior to joining the Foreign Service, Ambassador Hamza YAHIA-CHERIF graduated from the prestigious National School of Administration in Algiers in 1982, earning a degree in Diplomacy. Mr. Hamza YAHIA-CHERIF, who speaks three languages (Arabic, French and English), is an avid football fan and admires traveling and reading. The 61-year-old senior diplomat is married and has three daughters.