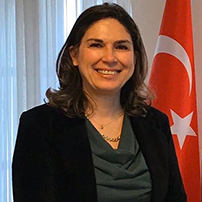 Ambassador of the Republic of Turkey

Career history at the Turkish Ministry of Foreign Affairs: