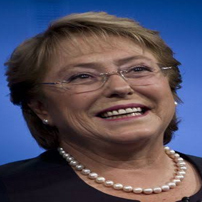 On September 1, 2018 Michelle Bachelet assumed her functions as the United Nations High Commissioner for Human Rights. The Office of the High Commissioner for Human Rights was established in 1993 and Ms. Bachelet is the seventh Commissioner.
Ms. Bachelet was elected President of Chile on two occasions (2006 – 2010 and 2014 – 2018). She was the first female president of Chile, as well as Chile’s and Latin America’s first female Defense Minister (2000 – 2002). She also served as Health Minister (2002 – 2004).
In 2011, she was named the first Director of UN Women, an organization dedicated to fighting for the rights of women and girls internationally. Economic empowerment and ending violence against women were two of her priorities during her tenure.
After finishing her second term in March 2018, she was named Chair of the Partnership for Maternal, Newborn and Child Health, an alliance of more than 1000 organizations in 192 countries from the sexual, reproductive, maternal, newborn, child and adolescent health communities.
Michelle Bachelet has a Medical Degree in Surgery, with a specialization in Pediatrics and Public Health. She also studied military strategy at Chile’s National Academy of Strategy and Policy and at the Inter-American Defense College in the United States.