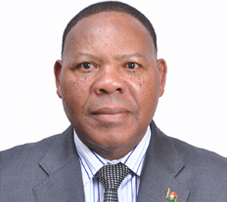 His Excellency, Dr. Mbuya Isaac Munlo is the new Malawi High Commissioner to India. He arrived in New Delhi on 23 October 2015 to replace H.E. Dr. Perks Ligoya who was posted to Nairobi, as Malawi High Commissioner to Kenya. Before his appointment, Dr. Munlo was Malawi’s Ambassador to Ethiopia where he served from 2010 to 2013. He was also accredited to Benin, Burkina Faso, Cameroon, Cape Verde, Central African Republic, Chad, Cote d’Ivoire, Djibouti, Equatorial Guinea, Gabon, Gambia, Ghana, Guinea, Guinea-Bissau, Liberia, Mali, Niger, Federal Republic of Nigeria, Saharawi (Western Sahara), Sierra Leone, Senegal, Somalia, Sudan and Togo. As Ambassador Extra Ordinary and Plenipotentiary of the Republic of Malawi to the African Union and the Economic Commission for Africa, he served as Chairperson of the Permanent Representatives Committee, and among other things, chaired the production of the African Union Commission’s strategic plan for 2014 to 2017. After serving as Ambassador in 2013, he worked as FAO Consultant on Partnerships and Development and as a Sub Regional Focal Person for the Renewed Partnership to End Hunger in Africa at FAO’s sub-regional Office for Eastern Africa in Addis Ababa, Ethiopia. Dr. Munlo’s career as a civil servant started in 1978 as an Agricultural Officer in the Ministry of Agriculture in Malawi. Between 1987 and 2010, he held various portfolios as a development manager, academician, adviser, and consultant in Zambia, Cameroon, Kenya, Malawi, Mozambique and the United Kingdom. Dr. Munlo is a holder of a Ph.D in Management Systems and Sciences, from the University of Hull, Kingston upon Hull in the United Kingdom. He also holds a Master’s Degree (M.A.) in Systems Thinking, with (Distinction) from the same University. He has a M.Sc. Degree in Agriculture Extension and Rural Development from the University of Reading in the United Kingdom. Additionally, Dr. Munlo has a postgraduate Diploma in Extension Methods from Reading University, a Higher National Diploma (HND), in Dairy Farming from Somerset College; and a University Diploma in General Agriculture from the University of Malawi. Dr Munlo is a Malawian, born on 12th March, 1958. He is married with four children. He has a number of publications to his credit and speaks English, Portuguese, Lomwe and Chichewa.