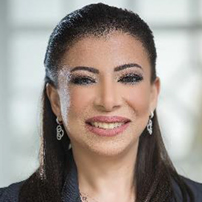 H.E. Dalia Khorshid is the Chairwoman and CEO for MASAR. Prior to that she founded and chaired Eagle Capital for Financial Investment. Khorshid is the former Minister of Investment for the Government of Egypt where she led the charge on Egypt’s investment law.
Khorshid has over two decades of extensive and diverse experience in the banking and financial sector with some of the biggest corporate names in Egypt, Prior to her stint as minister, Khorshid spent 11 years as Executive Vice President & Group Treasurer at Orascom Construction Limited and Group Treasurer at OCI NV where she successfully spearheaded the groups’ multi-billion-dollar fundraising initiatives. She also spent a year with the groups as Deputy Corporate Finance & Investment Banking Group Head of the North African region, where she skillfully brought numerous deals to completion including cementing a loan to OCI-owned Algerian Cement Company and advising on several high-level M&A transactions.
Khorshid held numerous roles within Citibank’s Corporate Banking Group in Egypt, working her way from Management Associate to Vice President of the division to Head of Corporate Finance and Investment Banking in Citibank Middle East and North Africa. Khorshid also spent three years as Relationship Manager of the Corporate Banking Group of CIB, Egypt’s largest private sector bank. Khorshid holds a BA in Business Administration from The American University in Cairo.