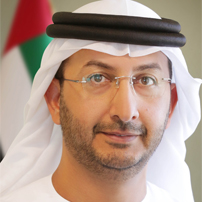 His Excellency Abdulla Al Saleh is Under Secretary of the Foreign Trade and Industry at the UAE Ministry of Economy. Among his responsibilities is to for drive closer cooperation, increase trade and investment flows, and deepen economic ties between UAE and the world. He is the head of UAE Free Trade negotiations team. He is also Vice-Chairman of the National Committee of the World Trade Organization.
He is Honorary President of the Arab-Chinese Centre for International Exchange; Vice President of the Annual Investment Forum; Board member of the UAE International Investors Council, Board member at the Emirates Gender Balancing Council, which aims to increase women’s participation in national development across all sectors and develop their skills and provide them with the necessary tools to support the UAE’s future progress. He is member of the Advisory Boards several International and local Universities.

Earlier in his career, Al Saleh was a diplomat in UAE Embassies in the United States and France. He holds an MSc in International Politics from the American University in DC and a Bachelors degree of Political Sciences from the UAE University.