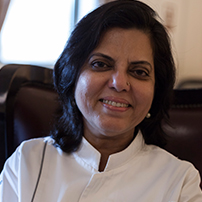 When girls her age play with marbles, Gunjan was gladly baking cakes. At the tender age of six, the tiny girl discovered her penchant for culinary delights and later went on to hone her cooking skills. This Philosophy graduate from the prestigious Indraprastha College for Women has been a food consultant, researcher and historian on Indian Gastronomy.

Gunjan’s love-affair with food, as she herself admits, started very early in life. “My father taught me to bake a cake when I was six. Interest soon turned into passion. And then there was no looking back!” As a professional consultant for the past twelve years now, Gunjan’s fervor has seen her going from strength to strength.

It is believed that it takes more than mere ingredients and technique to cook a good meal. A good cook puts something of himself (or herself) into the preparation. Gunjan Goela personifies this belief with her penchant for adding a cultural flourish to her cooking. Dubbed the ‘Scheherazade of Culinary Delights’, Gunjan takes great pride in the rich culinary heritage of India. This lady will gladly trade a homogenized burger for the desi vada pav!

With over 20 years of experience, Gunjan has also arduously scoured through several history books to find information on Indian cuisine. What’s more – she put her extensive research to use and churned out a royal spread fit only for the kings. Interestingly, in one such ‘Ancient food festival of India’ held at Maurya Sheraton New Delhi she used only tubular veggies and gave potatoes and tomatoes a miss as they were not grown in that era.

Celebrity TV Chef, who is very popular for her shows internationally and nationally.
Gunjan also had a chance to do a popular TV series on Indian food with internationally
Famous chef Garry Rhodes.

Her cookery shows in India on almost all the popular channels are very popular.
Has been judging various cookery competition of international level.
Gunjan is also a visiting faculty at some of important hotel management institutes
Was selected on scholarship to study South American food at John Folse Culinary Institue at New Orleans USA.

An active member with Slow Food Organisation, Turin, Italy. Was selected to participate at the grand conference to speak on Indian Food and its tradition.
Was a speaker on ‘Ayurveda and food’ at Bangkok for the IFFA conference on behalf of FLO.

From last 4 years, she has been conducting workshops on Indian street food, at
Slow Food, Turin.

This year too her Live Show on Indian Cookery at Turin in October 2014 is already sold out show.