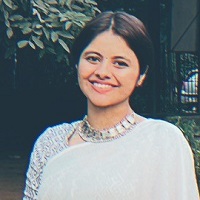 Gracy is a Research Scholar with keen interest in Post colonial Literature. She has served as the Chairperson for the Security Council, Global Youth India in the year 2021 and has been a National team member of Global Youth India for three consecutive years. She is a professional Kathak Dancer and has done her diploma in the same for two consecutive years. She has also worked with the Green Governance Initiative on SDG related concerns for a month long task.

She has a keen interest in Geo Politics and believes that women participation in the same is urgently needed to a larger extent. She has worked on similar lines while being a part of the India Brazil Youth Forum and has been a coordinator in various events organised by the Brazil embassy to enhance Indian Youth’s participation in World Politics, specifically that of women in BRICS.

Understanding that the global order is changing for good and the tides are shifted towards economic scenarios, women participation on global platforms inducing financial independence is need of the hour. For the same, Gracy has been trying to work as much as she can to be a part of this process. Her current work of research is also directed towards the economic backlash that Indian women had to face in the times of Indentured Labourer’s period. She believes that youth participation, thus is required not just in theory but also in actions.