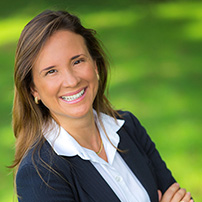 Gisela Sánchez is the Director of Corporate Affairs at Florida Ice & Farm Co. Before joining FIFCO, she worked as a consultant for governments, NGOs and companies in Central America in the areas of competitiveness and corporate social responsibility. In 2006, she published 10 Cases on Corporate Social Responsibility Good Practices, and The Competitiveness Potential of Guatemala. Between 2001 and 2003, she worked for the AVINA Foundation in Latin America as strategic initiatives manager supporting the development of social and environmental leaders in the region. Before joining AVINA, she worked as a researcher and project coordinator for the Latin American Center for Competitiveness and Sustainable Development at INCAE. Sánchez is an industrial engineer and has an MBA from Kellogg Graduate School of Management at Northwestern University. She is a Fellow of the Central American Leadership (CALI) and she recently received the Stephan Schmidheiny Innovation on Sustainability Award. She is a laureate of the John Mc Nulty Prize and currently she is the President of AMCHAM. Gisela has been named twice as part of the 50 most influential women in Central America by Forbes Magazine.