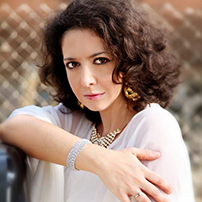 Gioconda is the inventor and pioneer of BollywoOPERA style.She has sung in the Bollywood movie Prague in 2013, and she has given her voice for the Bollywood movie Mary Kom on the song “Ziddi dil” together with Vishal Dadlani. On 19 May 2017 her song “Itni si baat hai” has been released by the label T-series. On 14 February a second release with the biggest Asian label T-series takes place: “That’s amore”, whose concept and typical gesture soon becomes viral all over India and the song soon hits more than one million views. On 20 December 2014 the song “Thodi Daaru” was released featuring Mika Singh.Gioconda has done live performances as first fusion ever between opera and classical Hindi music with artists of the caliber of Grammy Award winner Sukhwinder Singh, Sajid Wajid, Mika Singh, Hari Haran, Loy Mendoza, Gino Banks, Niladri Kumar, Silvaganesha, in festivals and auditoriums like Nehru Centre in Mumbai, Antewerpen State Theatre Belgium, Chicago, and also the Lavasa Festival, etc. On 31 March 2016 her international video “We are one” in which she sings and acts together with Anoop Jalota for peace in the world has been launched from the Minister of India in Delhi. She was the only international member of the jury of Miss India Worldwide in Pune in 2014, in which she also performed the song “Pyar Hua Iqraar” in opera version composed by herself. She has been international judge along with the Indian singer Amruta Fadnavis for the Indian competition “The Queen of Mashups”. On 2 December 2017 she is as well International judge along with Bappi Lahiri and Meenakshi Seshadri at Zeetv International Indian Icon talent competition in Chicagoand on 25 December 2017 she is international judge at the biggest music festival of Asia “Mood Indigo” along with Amit Trivedi. In January 2018 she does lectures on music along with her live examples of singing and performing techniques for the great movie director Subhash Ghai’s International School of film and music “Whistlingwoods” along with singer Ankit Tiwari and other exponents of the Bollywood industry.She is in the annual book of Italian opera singer for having sung in the first world edition of contemporary opera at “Teatro comunale di Modena”, broadcast on Italian state radio RAI. Gioconda is the first singer in the premiere world ever of the contemporary opera “Lavinia fuggita” by Matteo d’Amico. She has two degrees in opera singing and musicology from Italian conservatory “Santa Cecilia” and international high school of opera “H.Wolf”. The tenor Luciano Pavarotti has been her teacher, among other opera singers who selected her as one of the best students. She was selected as best singer at accademia rossiniana in Pesaro and she debuts the role of “Madama cortese” in “il viaggio a Reims” by Rossini with the symphonic orchestra of Rof at Rossini theatre in Pesaro.She sings again in a Rossini opera at Ercolano international opera season in “Il barbiere di Siviglia” and at teatro Politeama opera season in Lecce.After Rossini she debuts “Carmen” by Bizet. Her interpretation of the role “Mimì” in the opera “La Boheme” by Puccini received positive critiques.
She has been invited to the “Venice Awards” to sing for the composer grammy award winner Ennio Morricone with the programme being broadcast on RAI (Italian State television) in 2007.
She works with choreographer and director Linsday Kemp and conductor David Haughton for the opera “A Midsummer night’s dream” by Benjamin Britten at Teatro del Giglio in Lucca and later in teatro Verdi in Pisa and Teatro Goldoni in Livorno.
She has worked with the great conductor Antonio Pappano, currently director of the Orchestra dell’Accademia Nazionale di Santa Cecilia, in Rome.
She is singer and also director in the opera Tosca at the international festival “Quattro notti” in Benevento, and the next year at the same festival she makes her debut as an actress also and not only as just a singer in “La Vedova Allegra” by Lehar and as actress and singer again in “Orfeo all’inferno” by Offenbach at Teatro Lirico di Cagliari as well as in Christmas Carol with choir and orchestra also with the famous violinist Uto Ughi and the famous actor Michele Placido and in Germany she sings not only Italian opera arias but she is also specialized in Lieder at international chamber music academy “H. Wolf”.
She supports the women’s cause in a Puccini concert with all love opera songs devoted to women,she supports Aids researche through a concert in French Polynesia / Tahiti (Papeete) where she is honorary Citizen also aired in radio, as a musicologist she has a deep interest in fusion which has led her to perform in several concerts among which the one in Santa Cecilia Auditorium in Rome with the Italian jazz man Renzo Arbore and with the great conductor Antonio Pappano.
She was the first real opera singer in the world to make a fusion between opera and Hindi music and for that she received the Indian Women Award first time ever given to a non Indian woman.She is involved in several philanthropic projects and for that she got the noble chivalric title of “Dame” from Royal House.She won the Norman International Academy medal for her artistic career, and she got the honorary membership by several cultural Institutions as she started singing opera as a child prodigy, when she was 14 years old, even if normally an opera singer’s career starts at around 30 years of age. She sings in the following languages: Italian, English, Hindi, Punjabi, French, German, Spanish, Bulgarian, Albanian, Russian, Latin, Portuguese.