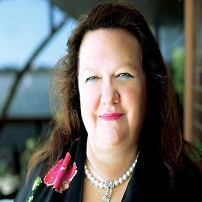 Georgina Hope “Gina” Rinehart is Chairman of Hancock Prospecting, a privately owned mineral and exploration company founded by her father Lang Hancock. Rinehart inherited 76.6% of the company with the remaining 23.4% constituting the Hope Margaret Hancock Trust.

Gina Rinehart is Australia’s richest citizen, despite her fortune being hit by falling iron-ore prices in recent years. The daughter of a high profile iron-ore explorer, Lang Hancock, Rinehart took her late father’s bankrupted estate and rebuilt it into something much larger. The biggest piece of her fortune comes from Hope Downs, a joint venture mine she has with Rio Tinto. The other is the massive Roy Hill project, a world class iron-ore mine in Western Australia, which started shipments to Asia in December 2015. She also owns a stake in Ten television network and and is now the largest owner of prime wagyu cattle in Australia. A court battle with two of her four children led to her resignation as trustee of a multibillion-dollar trust that owns almost 24% of the family company, Hancock Prospecting. In May, a court appointed her eldest daughter, Bianca Rinehart, as trustee. Rinehart confirms she has contributed more than $30 million in donations and sponsorships to Australia’s Olympic swimming, volleyball, rowing and synchronized swimming teams.