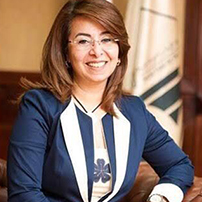 Ms. Waly brings to the position over thirty years of experience in the field of sustainable development, poverty reduction and social protection, women and youth empowerment. As Minister of Social Solidarity, a position she assumed in 2014, Ms. Waly has developed the national anti-drug strategy, led a nation-wide drug awareness and prevention campaign among youth and pioneered innovative programmes to rehabilitate and reintegrate persons with substance use disorders into society. In her current role, she also serves as Coordinator of the Inter-Ministerial Committee for Social Justice, Chairperson of the National Centre for Social and Criminological Research and chairs the Executive Council of Arab Ministers of Social Affairs in the League of Arab States. Her previous leadership positions include Managing Director of the Social Fund for Development (2011-2014), Assistant Resident Representative at the United Nations Development Programme (UNDP) in Egypt (2004-2011) and Program Director of CARE International in Egypt (2000-2004). Ms. Waly holds a Masters’ degree in Humanities and Bachelor of Arts in Foreign languages and literature from the Colorado State University. She is fluent in Arabic, English and French and has a working knowledge of Spanish.