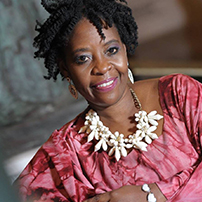 Independent Film Maker, Lecturer at the University of New Mexico & CEO of The Africa Thrive Foundation

Getrude Matshe is an inspirational speaker who has been described as a vibrant bundle of African energy whose zest and passion for life inspires everyone she meets. She is passionate about helping people achieve their full potential and find their individual life purpose. She is passionate about individuals’ success. This makes her an energetic, inspirational and enlightening speaker. Getrude has written several books and is now a book writing coach.
Her speaking career started in Norway 1989 and for 12 years she has worked in the IT industry as a Systems Analyst, Systems Support Manager and Project Manager. Getrude immigrated to New Zealand in 2001 with nothing and is now the Director of three successful companies.

• She started Medical Recruiters of New Zealand Ltd
• GM Global Investments Ltd (Property)
• She formed Simzisani Ltd, a talent agency catering for the film and advertising industry and has been instrumental in supplying ethnic extras for prominent movies such as Peter Jackson’s “King Kong” and James Cameron’s Avatar
• She is the founder and CEO of the Africa Alive Education Foundation, an organization that supports HIV orphans in Zimbabwe
• She formed Walk on the Wild Side Tours – a symbiotic tourism company that takes tourist to Zimbabwe to work with HIV and Aids orphans
• She became a Rooney International Scholar in 2012 and worked at Robert Morris University, Pittsburgh, Pennsylvania, USA
• She is the mother of three children and a well known African Storyteller, poet, artist and published author.
• She a script writer and an Independent Film Maker
• She writes for CNN iReport – https://ireport.cnn.com/docs/DOC-946671?ref=email