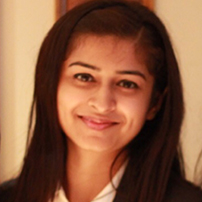 Geetika Malhotra is an Economics graduate from Indraprastha College for Women, University of Delhi. Having worked as an Assurance Associate at Ernst and Young for a year, she left her job in August 2018 to build a career in social consulting and contribute significantly towards achieving the goal of ensuring gender equality.

During her undergraduate studies, she was an active member of multiple college societies and events. She led Enactus chapter of her college, working on a social project, Project Aipan which was aimed at reviving a dying art form belonging to Kumaon region of Uttarakhand and transforming a community of Kumaoni housewives into self-sufficient entrepreneurs. The project bagged first prize at Enactus India National Competition 2016 under Walmart’s Women Economic Empowerment category.

She co-authored a number of research papers and won ‘Best Research Paper’ award in paper presentation competition for her research paper titled ‘Economic Development and Female Labour Force Participation in India – A Test of the U–Shaped Hypothesis’. In addition to this, she pursued ‘Judgement and Decision Making in Management’ course from London School of Economics and Political Sciences, England in 2015. She completed her training as a Mutual Fund Agent under Banking, Financial Services and Insurance sector, facilitated by National Skill Development Corporation India. Furthermore, she completed a certificate course in Public Policy, iPolicy for Young Leaders, organized by Centre for Civil Society.

She was one of the students on college ‘Principal’s Honour Roll’ for her individual initiative and achievement beyond the curriculum. She was also honored with ‘Outstanding Human Values’ award by her school in 2013. She has also held several leadership positions such as Head Girl and House Captain during her school life too.