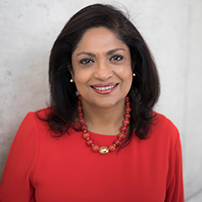 Director, Initiative for Women in Business, The Rotman School of Management

Geeta Sheker is the Director of the Initiative for Women in Business and the Intercultural Skills Lab at the Rotman School of Management, University of Toronto. She is committed to creating an inclusive and diverse work culture and championing the career success and advancement of women.
Geeta co-founded the Initiative for Women in Business in 2008 and has since created a broad portfolio of programs for women focused on advancing their careers. In addition, she oversaw the launch of the Intercultural Skills Lab, a platform and resource for the development of self-awareness, adaptability, communication skills and competencies demanded by an increasingly globalized workforce.
The Initiative for Women in Business is the only formalized Initiative of its kind at a business school in Canada and among a few in the world with leading edge programs and expertise in the Inclusion and Diversity space.
In 2003 she oversaw the launch of the internationally renowned Judy Project, a high-impact annual leadership program for 25 of Canada’s most senior corporate women. She has been instrumental in expanding the program’s curriculum continuing to build corporate financial support and growing a powerful and effective network of alumnae.
In 2009, Geeta was honoured for her work in advancing the economic empowerment of women as one of the International Alliance for Women’s (TIAW’s) 2009 World of Difference Award recipients. In 2012, she received the Canadian Diversity Champions Award, Women of Influence.
Before joining the Rotman School in 2002, Geeta was Director of General Leadership and Management Programs at The Banff Centre for Leadership in Alberta, Canada. International experience includes executive education work with the Royal Thai Government, Canadian International Development Agency, Indian Railways, Bankseta of South Africa and Scimitar Oils in Dubai.