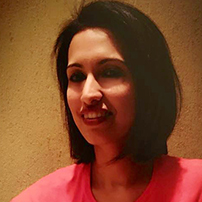 Gayatri Pahlajani holds an MSc in Gender and the Media from the London School of Economics (LSE) and has worked for MTV, HIT 95 FM as well as hosted a show on All India Radio during her first job as a qualitative researcher at ACNielsen. With twelve years’ experience in commissioned work, she started The Big Sneeze (TBS) to design ideas that truly tickle, and she continues to court carpel tunnel syndrome writing in both long-form and short-form formats. Having finished a filmmaking course at the New York Film Academy (2013) – coupled with her time working on promos at MTV – she also directs and conceptualizes corporate films and documentaries. And, using her past experience in radio and TV, she also redesigns Integrated Voice Response Systems (national 1800 numbers). Depending on the project, she ghostwrites or co-writes books but does not, as someone mistakenly asked her once, specifically write about ghosts.