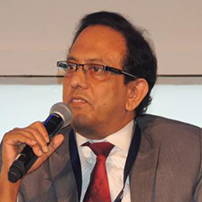 Prof.Dr.Goutam Roy Chowdhury – Founder of Techno India Group, Mentor and Chairman, Chancellor,Techno India University & first generation successful technopreneur. He started his Career in the year 1985 with only 5 INR. He ventured into Computer training and software development eventually leading to generation of Fund and development of this mega consortium with several educational campuses offering education from KG to PhD. TIG under him consists of 100 campuses, 21 Engineering Colleges, 12 B-schools, 18 Public Schools, 11 Independent HS schools, 4 Universities, 22 High End Research Labs, 3 multispeciality hospitals,2 upcoming medical colleges, 1 Ayurveda College,R &D Centres catering about 1,00,000 students under the guidance of over 5000 faculty and professionals. With his expertise and intellectual he has added various accolades to Techno India Group in diversified fields. He is spearheading a giant project in the field of medical advancement by setting up 300 medical college pan world. He has initiated a dream project of setting of several Bio Tech parks in a stretch of 10000 acres of land. His smart step to coloborate Entreprenuers’ Development with CSR initiatives is a state of art innovative concept.

A man of words – Once during his meet with honourable ex CM of WB he quoted,”Given a chance; he will change the inclination of students migrating to South for Technological Advancement to West Bengal” and he proved it thru his meatle. Today students from Chattisgarh, Bihar, Jharkhand, Orissa are coming to Techno India instead of migrating to Southern India for Technical Studies.

His philantrophic approach- His notable contribution towards uplifting the standard of life by providing higher education to the kids of rickshaw pullers, labours, house attendants, drivers, garderners, office peons and placing them to multinationals is really appreciable.

He believes that life can start even after 60. He gave a scope to so called unproductive intellectual capital to various projects wherein they can add value vide their rich experience. In lieu of which, he would have spent time in parks enjoying peanuts and quarrelling with his better half and wasted his time.