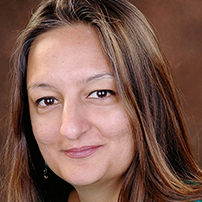 An IIM Bangalore alumna, Gauri graduated from the Sydenham College of Commerce and Economics (Mumbai) and dropped out of NMIMS just before completing Masters in Marketing Management. Her experience in the travel industry spans over 20 years and includes varied profiles in different segments including hotels, airlines, CRS and a 8.5 year stint as the regional director (South Asia and Middle East) of the world’s largest coach touring company. She grew their business multi-fold before plunging into her second entrepreneurial venture – the Active Holiday Company – the first Indian company to focus exclusively on International Adventure Travel. The company is the sole India representative of four of the of the six World Marathon Major races in the world as well as for Comrades Marathon and many others.
She was voted the Most Influential Person in the Travel Industry by NDTV Profit & OTM in 2014 and was a member of the Outlook Traveller Jury awards for 2 years in a row (2014 & 2015). She frequently contributes to reviews and analysis of changing trends in the trade and consumer media. She has the distinction of being the only Asian speaker at the Spain Tourism Boards’ Tourism Round Table in Barcelona and is one of the 8 Indian members of the ITOCI (Indian Tour Operators Council for Italy). She has also held the post of President of VUSACom – Bangalore Chapter (Visit USA Committee operates under the guidance of the U.S. Commercial Department). As a women entrepreneur she has addressed audiences at various forums including the CII and Young Indians.
Her first book, a fictionalized memoir ‘Wise Enough to be Foolish’, was published in August 2013 and sold thousands of copies. A traveller at heart, she has travelled to over 60 countries and she tries to combine International marathon races with her holiday plans. She is married to Uday Jayaram. They have two daughters. When she is not travelling for work or pleasure, she is busy playing squash or listening to rock music on a long distance run.