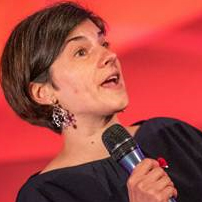 Gabi is a people booster and limiting beliefs buster, and started to be passionate about human potential when she was in middle school, and she supported her pears in unlocking their possibilities. During her studies, she supported young adults in discovering their strengths and how they can use them by being a volunteer trainer in an NGO. After studying Psychology, School Counselling and helping children for 6 years to find their voice, she followed her husband, and she found herself in a new country, without speaking the language without any possibility to work. After a few months, she realised that the skills and knowledge she had developed along the years were still there, and she could use them to build another career. Like the Phoenix bird, she analysed her strengths and talents, used her creativity and persistence and rebirth from her own ashes. Now she follows her passion: to facilitate sustainable change in organisations and people’s lives and support them to become closer to who they are and achieve their dreams faster than on their own.