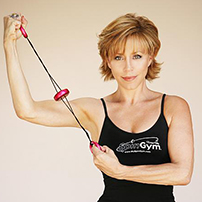 If you look up in the dictionary the words “perseverance and determination”, there is a picture of Forbes Riley. As a little girl she overcame a disfiguring accident, having her mother being held hostage by gunpoint in her home, and a tragic accident that landed her father in the hospital for over 3 years while she was a teenager. While most young girls in her position might have thrown in the towel, Forbes learned early on the power of forging ahead, even when there is no end in sight and everyone tells you it’s not possible. Another major obstacle Forbes fought was her weight – now to most people that’s a typical struggle, but when you have dreams of being a Broadway dancer and actress it became monumental. She worked in spite of hurtful comments and rejection and acted in TV (24, The Practice), movies, hosted TV shows (ESPN’s X-Games, her own talk show on TLC, and a series for ABC Family. Finally, after two decades of humiliation she managed to turn her weight and eating around when at age 42 she gave birth to 7-pound twins and co-hosted the Jack Lalanne Juicer infomercial, which aired worldwide for 8 consecutive years and grossed more than $1 Billion dollars. She not only managed to influence and inspire millions of moms to find their personal happiness with their bodies, but to land in the National Fitness Hall of Fame alongside some of her fitness heroes. Forbes has prided herself never having had a job, but always managing to make a living, start businesses and follow her dreams. Now with a multi-million dollar fitness empire, books, a new TV series on health and wellness, she inspires all of us to believe that “If You Leap, the Net will Appear.”
SpinGym is the name Forbes Riley coined for a unique fitness gadget she found on a business trip to London that was being used as a “destresser” in the office. The company wasn’t doing particularly well and when she tried this product for the first time, she “had a vision” for the entire rest of her life. Suzanne Somers is to ThighMaster as Forbes Riley is to SpinGym. ThighMaster sold more than 10 million units and is pop iconic. With her background in dance, 30 years as a martial artist (which came about after she was mugged in LA), licensed massage therapist, and certified personal trainer, she has profound and unique understanding of the human body. Forbes is also one of the top infomercial hosts in the country with more than 110 National Infomercials to her credit, so she was asked to launch her brainchild on the Discovery TV series Pitchmen with Billy Mays. Sadly reality TV is anything but and both she and SpinGym were put in a very bad light and became the protagonist on the show. The morning after the public debacle, there were over 15,000 scathing YouTube comments – more than enough to shatter the typical person. Forbes having never manufactured a product, or dealt with overseas shipping or even the notion on how to market a fitness product, turnerd to her husband and asked to risk everything they had to make this dream of SpinGym come to fruition. On blind faith, they mortgaged their house along with their kid’s college funds to raise the money for the first 10,000 SpinGyms. Then it got worse! Between struggles with language barriers (it’s manufactured in China), customs and a shady broker it took more than 8 months before they finally saw a finished product. At the end of the rope for most people, Forbes has one ace up her sleeve – her ability to communicate on TV mixed with her passion for this product – she took her drive and commitment to HSN (who they wanted to pass on it, after seeing it bomb
on PitchMen) and they placed a minimum order of 5000. On January 4th, 2010 Forbes Riley sold out 5500 SpinGyms in just 34 minutes and has to date, sold more than 10,000 a month, every month since then on the network. Since January, with introduction of her Pink SpinGym, Forbes has sold more in 2012, than she did in all of 2011. In addition to home shopping she has shot an infomercial, launched in 34 countries and has developed internet and fitness club strategies as well as directives with rehab and physical therapy centers. Her SpinGym postings along with those of her fans have inspired millions – the most moving of which include quadriplegics, war vets, and several young teens who are fighting muscular dystrophy. Beyond SpinGym, Forbes speaks around the country, attending health and fitness expos and is on a mission to help others achieve their physical and financial dreams!