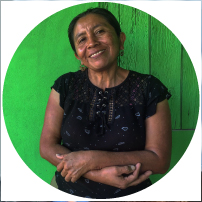 Mother of 3 children. Mayan indigenous, semi-alphabetic. She was the first woman from Belize to travel to India for training in Solar Engineering.
He managed to bring light to 100 homes and 500 people in his village of Santa Teresa. Her success was such that three years later, two women from the village of Santa Elena followed in her footsteps and also achieved light in her village. Florentina now leads a venture for the construction and sale of solar lamps in southern Belize and wants to continue dreaming big for more changes in its Mayan world of Belize’s tropical forest.