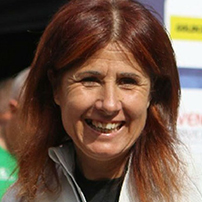 Maria Fernanda Moreira Ribeiro, GCIH (Portuguese pronunciation: born 23 June 1969), is a long-distance runner born in Penafiel, Portugal. The pinnacle of her career was at the 1996 Summer Olympics when she won the women’s 10000 m gold medal, establishing a new Olympic record of 31:01.63. Her victory gave Portugal its third Olympic gold medal.
Ribeiro started running with Grupo Desportivo do Kolossal, before joining FC Porto, which she represented from 1982-1992. She returned to FC Porto after two years at Maratona Clube da Maia. Along with her sports career, she has worked at her town hall as a sports adviser to the mayor
She holds Portugal’s record for most Olympic medals. She has the record for most athletic medals won in Portugal, having participated in five summer Olympics (Seoul 1988, Barcelona 1992, Atlanta 1996, Sydney 2000, and Athens 2004) and many more European and World Championships.
Ribeiro has continued running in her later years and won third place at the 2010 Lisbon Half Marathon, when she was 40 years old. She helped the Portuguese women’s team win the title at the European Cup 10000 m in June 2010, rounding out the country’s top runners with a seventh-place finish.Fernanda Ribeiro is the founder of the Athletics Academy with her name, which aims to reach the whole country and functions from Maia, north of Portugal. This Academy is intended to be a reference in sports as is its mentor – Fernanda Ribeiro.
The Academy’s motto is: “Atheltics as a life practice”.