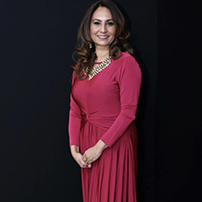 Business woman, Public figure, PR Guru, Event Management expert, lecturer, columnist and philanthropist. Faz has been in the beauty industry for more than 18 years with Four Signature Salons and spas in London and overseas. Alongside her businesses, she was a Make Up artist working for all the top British and Asian fashion magazines alongside TV, Film, Stage, Celebrities and Politicians. During this time, she was awarded for her work by TV and Magazines.

Ms Faz Zia has had successes in a plethora of ventures and fields, most recently as founder of her signature PR and Events Company – Fazz PR and Events. Fazz PR and events have a list of their own banner events that have been running successfully for years and has a multicultural nexus highlight value on the London diversity scene.
Another annual feature which is very close to Fazz PR and events ethos is the Macmillan Charity gala that they organise and has been successfully fundraising for this great cause, Macmillan have knowledge this effort to fundraise by crediting Faz as the first Asian Woman to solely host fundraisers on behalf of Macmillan.
Community work has always been a core part of Faz’s life whether her active role in fundraising for Macmillan Cancer Support or volunteering for Victims Support.

Faz’s path to philanthropy started with her involvement with on women’s issues and rights, this lead to her involvement in a parliamentary debate at the Houses of Commons, to which she was a Project Director, titled ‘Women against Terrorism’ and another debate on Forced Marriages.
Faz’s tireless voluntary work has been awarded with a Leadership and Mentoring Award in 2014 in London and was also awarded at the 2017 Womens Economic Forum 2017 in Delhi and Iconic woman award in India April 2018