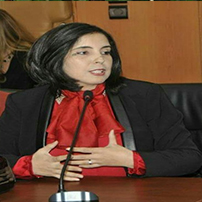 Founder and President of the International Institute for Scientific Research, IIRS

Associate Professor in International Economic Law in the University Mohammed V Agdal Rabat. President and Founder of the international Institute of Scientific Research. Since 2014 she has been selected as expert by the Council of Europe to provide expertise to its program on building capacity against cybercrime from 2014 to 2016.
She presented lot off paper about women entrepreneurs like my participation to the conference, North to North – Women as agents of change, organized in The House of the Estates, 29.09.2011 Helsinki by the Finnish Committee for European Secutrity (STETE), 1325 Network Finland and the Coalition of Finnish Women’s Associations (NYTKIS RY), her paper was about « women economic empowerment in Morocco.
She attended the International Visitor Leadership Program Organized by US Department of States, 1-15 December 2012 about The Strategic Dialogue with Civil Society launched by Secretary’s Clinton with the title “Civil Society: Cornerstone of Democracy. She organized lot off sessions of training and workshops to reinforce women entrepreneurship.