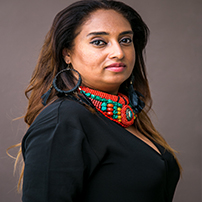 Fatima Alimohamed the CEO of African Brand Warrior is an Kenya/Ghana. She is an advocator for Africa and African brands with a solid track record across African markets that lead her to change from boots to heels where needed. Fatima is a thought leader in St rategy, Brand Development, Consumer Relationships,
NPD, Marketing and Communication. Prior to Founding and becoming the CEO of African Brand Warrior, she was the GM for Wilmar Africa in both the Palm and Shea Industry in West Africa and has been representing the industries in various positions and boards. Fatima’s passion is to create brands that make an impact on the end consumers and are tied to the social development of a Nation. Her belief is that every contact she makes through her various African markets visit must educate, inspire and help transform the lives of people. She believes that lifting the people up through brands is the one way to grow both people and businesses. One of the great traits Fatima has is that she humbly shakes hands with Presidents of Nations and the Common man and woman in the market places with the sole understanding that all are sons and daughters of the same soil. None is greater or inferior than the other. Fatima is known for creating from scratch to re-creating and rebranding various brands across Africa in various categories in Rice, Edible Oil, Soaps & Detergents, Milk, Tyres, Cement. Personal Care, Beverages,Telecom amongst others. In Ghana, she is known for taking the Frytol brand that was bought over from Unilever by Wilmar to become Ghana’s Number 1 brand and in Uganda she created and built the Fortune brand to take the leading brand position in a short span. Known not to be one to sit behind desks but rather walk markets in places where many dare not to, Fatima is in touch with the pulse of the market. Her knack of getting her hands and feet into the soil to deeply understand African consumer needs and wants is unmatched. It can be said that Fatima only creates brands that vie for the number one position and nothing less. Various Universities draw and tap into her skills, where she mentors young African marketers and entrepreneurs on being uniquely different. She has represented the Marketing Fraternity as a Governor on the Kenya Private Sector Alliance (KEPSA), been the Chair of the Marketing Society of Kenya, Founder Marketing Society of Tanzania and Uganda, The Vice President Chartered Institute of Marketing- Kenya, Chair of the Advertising Standards Commit tee, Vice President Junior Chamber International (JCI) plus a Member of various Marketing and Advertising Boards. Fatima was pulled in by the Founders of Brand Kenya who reported to the President on various occasions on how to market the Count ry. She was with Bidco Oil Refineries Kenya and Bidco Uganda overseeing Marketing and Sales of leading brands in East Africa and was prior to that, the Regional Director for very powerful brands of MNC’s whist at Ayton Young & Rubicam a part of the International WPP Group. She was selected to represent Young & Rubicam amongst the best of Africa’s teams to join the Young & Rubicam global participants at the ASAS intensive training in Prague, Czech
Republic.
Fatima was honoured with the TOP 50 CMO’s Global award and the TOP 100 Most Talented Marketers Global Award and was recently handed a Citation for Leadership Excellence by the African Women Leaders CMO Asia. She was also honoured with the Mother of Ghana award for a social development brand cause and was also honoured and Stooled as the Queen Mother (Nkosohemaa) in Memia, Western Ghana for her role in social development in the area of women and children. This has earned her the title of a Queen Mother and a Local name ‘Nana Nyanzu’. Early this year in May 2018, she was
awarded in London, United Kingdom at two separate events the ‘Inspirational Woman of the year’ By Women4Africa and also won the award of Marketing Woman of the year by WinTrade London. She also drives the agenda for building Africa from the soil across the value chain and sits on the commit tee of International trade relations at the Association of Ghana Indust ries and is the current Chairperson of the Agriculture Sector in Ghana at the AGI advocating for Africa to work on the full value chain and not be an importer and exporter of raw materials. Fatima is an avid writer on marketing in various media publications and an astute speaker at International Conferences on her new passion Agriculture, Women Empowerment and of course Brands and Marketing. Fatima is referenced in various books by International University Professors when writing on Marketing in Africa. She supports the St rands of Pearls project on mentoring young African girls on a project titled ‘path of hope’ and is known to be involved in many charity projects without talking about it publicly as she believes when the right hand gives, the left hand should never know.
Not one to be left on other fronts, Fatima has trained with the National and Local teams of Kenya on regional and International level in Hockey and Table Tennis and used to host programmes on radio (East FM) TV (KTN) in Kenya plus acted in plays once in a while. She is the face of one of the most remembered advert in Kenya (CHIPSY). She is a single parent who has raised her daughter well despite a bit ter divorce and custody bat tle. She managed to pull herself through even after having a brain st rokethat left her paralysed for a short while. In a nutshell, Fatima is the essence of a true daughter of the African Soil. Her story is of an African woman who has stood against all odds in a male dominated space and continued to defy all odds and challenges thrown at her with her crown firmly in place