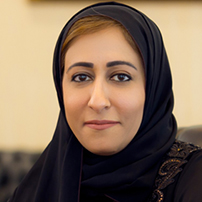 Fatima Al Jaber is a prominent leader in the GCC area construction industry and is currently a member of the Board of Directors of the Al Jaber Group and former Group Chief Operating Officer for the years (2007 – 2014). Prior to this Fatima worked with the Abu Dhabi Government in various technical and managerial positions, including her role as Assistant Undersecretary for Projects & Technical Services at Abu Dhabi Public Works Department and Abu Dhabi Municipality. Concerned with how women operate in the economic fields, Fatima founded Al Bashayer Investment Company, as a wealth management service provider for female investors and acts as the chairman of this company.

In 2010, Fatima became the first Emirati woman to be elected to the Board of Directors of the Abu Dhabi Chamber of Commerce and Industry (2010-2014). Fatima was a founding member and the Chairperson of the Abu Dhabi Businesswomen’s Council (2010 -2014) and was elected as the Chairperson of the United Arab Emirates Businesswomen’s Council for the term (2011 to 2014).

She has been twice acknowledged by Forbes Arabia as an Arab career woman of note. Most recently she has been ranked #4 by Forbes Middle east 100 Most Powerful Women in the Private sector for 2015.

Fatima has won many awards and accolades from distinguished sources such as L’Official Middle East Magazine, and at the Arabian World Construction Summit, Amcham all lauding her as one of Arabia’s premier businesswomen. She was named by Arabian Business as the fifth (5) Most Powerful Arab Women for 2013. In Feb 2013 she was awarded an Entrepreneurship award at the Gr8 Woman Awards. In 2014 she was acknowledged by Forbes International as No.94 in The World “100” Most Powerful Women list.
Fatima continues to play an active role in the business and corporate life through her different positions & roles in Private and Public Companies.

She graduated from the United Arab Emirates University with a Bachelor of Engineering (Architectural Engineering).