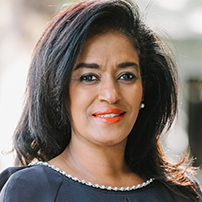 Member of Parliament for Nairobi County, Republic of Kenya

Honourable Esther M Passaris, OGW is a Member of Parliament representing Nairobi County; the capital city in the Republic of Kenya. She is an accomplished social entrepreneur, business and political leader.
In the National Assembly, Hon. Passaris is an active member of the Committee on Health and the Special Funds Account Committee. She is also a founding member of the Kenya Parliamentary Caucus on Sustainable Development Goals (SDGs) & Business.
In 2002, Hon. Passaris established Adopt-A-Light Ltd; the pioneer lighting and outdoor advertising company through which she is credited with revolutionizing the outdoor advertising scene and successfully introducing the concept of Public Private Partnership (PPP) in Kenya by implementing a multi-million US dollars project to install street poles in the city of Nairobi.
In 2004, Hon Passaris was awarded the Eve Woman of the Year Award, Make a Difference Award and the Mayoral Achievement Award. In 2006, she was honored with the Mashiriki Innovations in Local Governance Award and National Human Settlement Award by UN-HABITAT, and was among a host of women entrepreneurs recognized in the report “Voices of Women Entrepreneurs”. In the same year, Adopt-A-Light won Company of the Year Awards (COYA) in recognition of its corporate citizenship management.
Hon. Passaris holds a Bachelor Degree in International Business Administration from United States International University (Africa) and is a Vital Voices Fellow