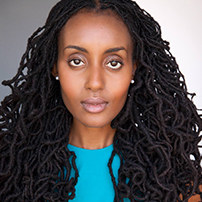 Esosa E. is a globetrotting Film Executive, Health Expert, Actress, Writer, and Fashion Designer who was called an “Afro-Renaissance Woman,” by the Weekend Argus, named a “Young African Visionary,” and featured in The Root’s List of “10 African Artists and Entrepreneurs You Should Know.” Currently, she has assumed the role of COO of Point Eleven Films, a production company with a slate of Hollywood films in development with A-list stars attached, and acting CEO of AfroVision, a production company and film fund dedicated to producing global African Diaspora content. As an actress her one woman show The Woman Who Would Be King, which has now traveled from South Africa to DC to Uganda , debuted in 2017 at the John F. Kennedy Center for Performing Arts on the
Millennium Stage. Outside of entertainment, Esosa is a Holistic Lifestyle Expert, published author, and blogger. She is the creator of Raw Girl in a Toxic World , a health blog that features holistic health and vegan lifestyle tips, and the author of several books
including The Acne-Free Diet and her latest book Got Veg? How to Thrive on a Plant-Based Diet . Esosa is also the voice of SHINE, a wellness and mindfulness app that reaches millions of users daily.