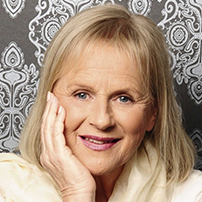 Erika Mikaelsson, born in Sorsele, Sweden, in April 12 1953 ,has an academic degree in Journalism (Gothenburg University)
1976 she became the first female sports journalist in Sweden
She has worked over 20 years as a news journalist in news papers, local radio stations and at a regional TV-station, before she in 1990 entered the national late night news as an anchor woman and editor. She also worked as a news reporter and was an editor for the foreign news in the morning national TVnews broadcasts.
As early as 2005 she started a good news channel that 2010 became greatpeople.tv.
2012 she travelled with her team to Uganda to educate young women as grass root reporters in constructive journalism.
She has written 5 books, among them the latest titled “Good news for an even better world”. That is a description of the big change that is taking place in the media area in Scandinavia and soon in the rest of the world. She has been a guest teacher in Halmstad University and is now a project leader for a refugee project in her town of birth, Sorsele Sweden. Back to her roots in Swedish Lapland
Erika Mikaelsson has also made a documentary. The movie The Nordic Sound, is about a sami rock singer searching for the origin of music. The composer Benny Andersson, World known from the pop group ABBA is also performing in the movie.
Last but not least: She is a proud mother of a 23 year old daughter, now studying to become a waldorf teacher in Stockholm.