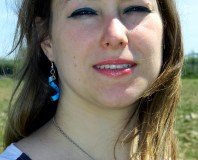 Her Philosophy & Psychology academic study has led her to specialize in the field of the unconscious & soul, particularly in Dream Analysis, Awaken Dream and Quantum Guidance.
Trained in Facilitated Communication (helping autistic & speech-impaired individuals to express themselves), council member of the Francophone Confederation, secretary of the Paris` Association and volunteer in workshops, she translated Mary Craig*`s book, Voices from Silence.
After a diploma in Anthropology of the First Nations and ethnomedecine -with a research work on mental illness, its causes and its different ways of healing in the world-, she was eager to deepen what the so-called ‘crazy people’ had to say about themselves. She is now preparing a book about the Wisdom of the Fools, interviewing schizophrenics, voice hearers, paranoiacs, handicapped and autistic people who have found a path to healing and have a multitude of wisdom to share with us.
Her travels throughout the world have shown her the importance of preserving the knowledge of the tribal Elders who have shared with her. Her visits to the Native America have conducted her to direct a documentary about the fight of the Lakotas Sioux against a multinational who has set its mind to implant a uranium mine on their sacred lands.